Great art and profiles of the colourful characters of the Hunters of Reloria series. 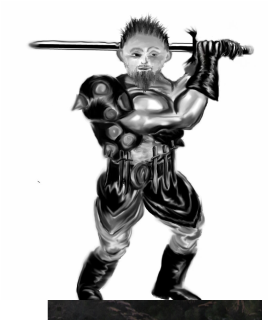 Asher Grey is a mysterious mountain man from the West Lands. He claims to have been banished from his homeland by the mountain men council.  Baja hired him as a guard for their wagon due to a recent robbery on the dangerous South Lands highway.  He prefers to be called 'Ash' and rides an enormous black stallion named 'Charger'.  He is close to 7 foot tall and has fair, although tanned skin.  He has short, spiky black hair and a small goatee. His eyes are a striking yellow-green.   Ash wears black leather with metal studs and a belt with 6 throwing knives.  He has uncanny reflexes and a taciturn nature. 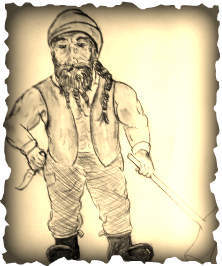 Character: Baja Stormhammer
Race: Dwarf
Homeland: Diamond City
Baja is a happy-go-lucky dwarf who has a love for life, ale and gambling.  He is one of the few dwarves to willingly leave Diamond City and he carries goods around the Relorian South Lands.  Baja has dark red hair and beard worn in braids.  He carries a wooden club, two throwing axes, and a small wooden chest full of gold and precious gems.  He is the secret holder of an ancient dwarven weapon. 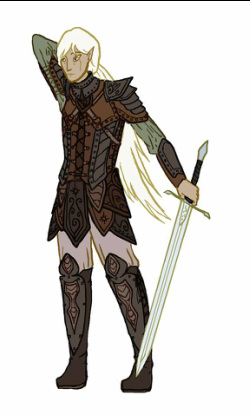 Character: Daeron
Race: Common elf
Homeland: Conlaoch Diarmada
Daeron is the elven guardian of Princess Shari Rose.  He is 92 years old, which is approaching middle age for an elf.  He is fit and muscular and wears brown leather clothes and boots.  Daeron has long white hair, which is tied with a leather strap, and his eyes are pale blue.  His quick elven reflexes make him a formidable opponent with the long sword.   He is loyal and very defensive of any criticism of the temperamental young princess. 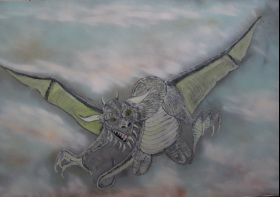 Character: Dragon
Homeland: West Lands
Little is known of the Relorian dragons in the South Lands. This dragon has detected the unsavory presence of the Vergai and has been scouring the countryside at night in search of the invaders.   The dragon reaches a towering height of 24 feet and its massive wingspan is 40 feet wide.  It has many horns on its head and a line of spikes from head to tail.  It is grey in colour and has piercing yellow eyes.  Underneath the wings are scales of emerald gemstones. 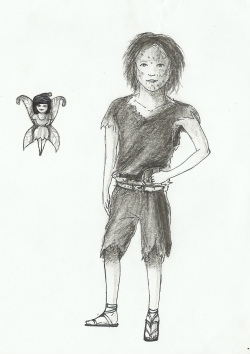 Fendi is a pimply brown-skinned halfling and the youngest son of Old Fandri.  At 3 and a quarter feet tall, he is shorter and broader than Randir.  Fendi is almost 16 and is best friend to Randir.    He is the last of his many siblings living at home and  enjoys a degree of freedom from his aging parents.  He sometimes hunts and cuts wood with his father, but is more often found helping Randir with his many chores.  Fendi rides a red-brown pony named Jilly.
Fendi-La is Fendi's bond fairy and she has a mop of black hair.  She is very sweet and helpful and well-loved amongst the people and animals around Southdale. 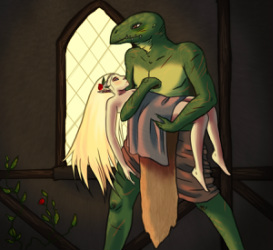 Character: Kiprop
Race: Vergai
Homeland: The wastelands of Vergash
Kiprop is the lead warrior of the Vergai invasion force into Reloria.  He has conquered many lands before and has successfully  captured wizards from Nnanell.  Warrior Kiprop is a brave leader and fierce in battle. He is a strong, although sometimes impatient leader and knows how to command both a large army and a small stealth force.   He carries a morning star weapon and has scars from previous battles.  All the Vergai are tall with grey-green scaly hides and a long thick tail.  They have sharp-toothed muzzles and small beady eyes.   Kiprop has a raspy voice and his only fear is of dragons. 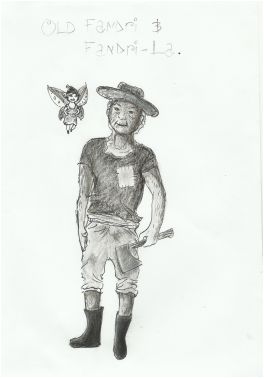 Character: Old Fandri, son of Fangrin
Race: Southern halfling
Homeland: Southdale in the Relorian South Lands
Old Fandri is a woodcutter who had a colourful youth before settling down with his wife Arnia in Southdale.  Fandri is friends with King Varl and carries an axe and an engraved broad sword.  Fandri is in his late 50s and his hair has turned grey with old age.  He is very fit considering his years and spends his days hunting and woodcutting in the woods around Southdale.  He lends wisdom to the young halflings.  Fandri has many grown-up children and Fendi is his youngest child.
His bond-fairy is Fandri-La who is a plump old fairy and quite bossy. 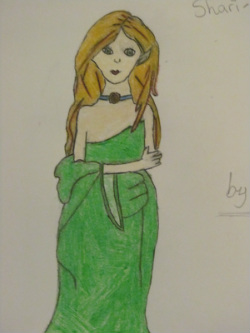 Character: Princess Shari-Rose
Race: High Elf
Homeland: Conlaoch Diarmada
Shari-Rose is a headstrong and temperamental highborn elf.  Her royal Princess title is courtesy of her status as the niece of the Elven King and Queen.  She is just 21 years old, but is demanding and spoilt.  Her long blonde hair has a touch of red, and her eyes are bright green.  She is growing rather chubby for an elf, due to her love of halfling food, and wears a crystal rose at the base of her neck.  The Princess is the most magical elf in Reloria and all the elves defer to her wishes; a fact that explains her haughty attitude.  She is guarded by a many elf guardians and her chief protector is Daeron, who has watched over her since she was a child.  Shari-Rose has been in Lakehaven for 5 years and before that she was in the Western Outpost with her father. 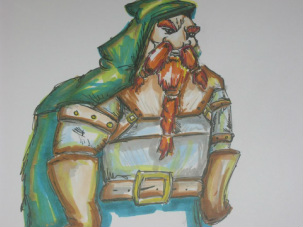 Baja is a quietly spoken red-haired dwarf who often is overlooked when compared to his boisterous brother.  He is thoughtful and inventive and likes nothing better than reading scrolls in musty castle libraries.  He has spent several years studying with elves and gnomes and has now returned to help Baja in his new enterprise in the South Lands.
Raja plays the pan pipes and has a mystical power.  He carries a two-headed battleaxe and has throwing axes strapped to his back.  Although he is a worthy fighter, he is peaceful at heart and would prefer diplomacy to warfare. 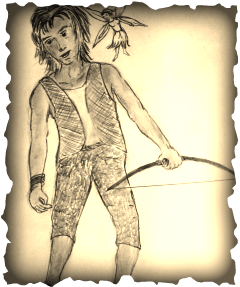 Character: Randir, son of Renny
Race: Southern halfling
Homeland: Southdale in the Relorian South Lands
Randir is a good looking young halfling who makes friends easily and is especially well-liked by the female halflings.  He grew up in the small village of Southdale and before this quest he had not travelled beyond his village.  He lives with his parents in a crowded cottage next to a water mill.  Randir is the eldest of 12 children and is 17 years old.  He has smooth brown skin, shaggy hair and is 3 and 1/2 feet tall.  He is frequently tripping over his gangly long longs and works halfheartedly on his father's farm and mill.  Randir wears 4 plaited leather friendship bracelets around his wrist.  He sets out on the quest on a pony named Star and later rides a chestnut pony called Fetter.
Randir's bond fairy is named Randir-La.  She is one-hand tall and has a big attitude.  Randir-La has iridescent wings and brown hair and skin.  The little fairy wears a dress and a green cap with a bell.
Randir by John Sparks 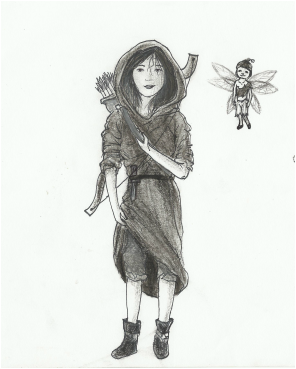 Sienna is a an archer huntress from the woods near Greendale.  She has recently suffered the loss of her father and is avoiding her covetous uncle.  She is only 15 and has an unkempt appearance of tangled brown hair and fierce eyes with long lashes.  The huntress wears a deep-hooded green cloak and dresses in dirty boy's clothes.  She uses a longbow and carries a knife at her belt.  Sienna rides a white gelding with black patches, named Patch.  She is fearless and a skilled huntress. 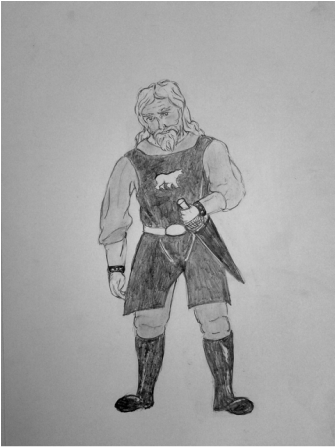 "Onward to danger and glory"

Varnon is the son of King Varl and heir to the throne.  He is almost 40 years old; tall, with blonde curls and a full beard.  He is fit and muscular and has spent a lifetime fighting dragons in the West Lands.  He wears the golden bear red tabbard and carries his armour on his spare horse.  His war horse is a huge chestnut stallion called Charger.  His squire is Jacab and his hunting dog is Rusty (short for Rustic Warrior).  Sir Varnon carries a pike and a basket-handled broadsword.  He speaks very formally and is a well-respected leader.  He can appear arrogant to strangers.  His has a wife and several children in the Diagro Plains.