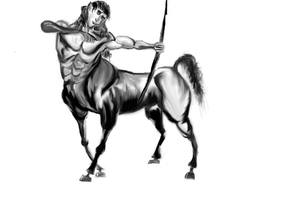 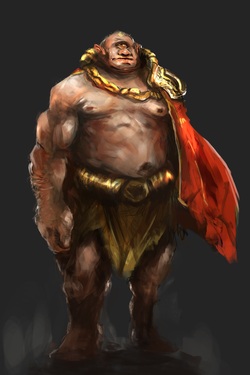 'Cyclops' by Mike Fertig
Character: Emperor Chi'garu
Race: Cyclops
Homeland : unknown
This Cyclops is the cruel emperor of many countries and his once peaceful Cyclops brethren are now a deadly fighting force. The Cyclops were a peaceful  people under Chi'garu's father's rule, but when the father died, Chi'garu started a conquest. He is determined to reign over all of Zumar and now only Reloria stands against him.
He is a bronze-skinned giant with one hazel eye capable of shooting a laser beam at his foes.  He is dressed in a gold skirt, a gold-edged black cape on one shoulder and a thin circlet of gold on his forehead.  His head is shaved except for a flowing black scalp-lock. 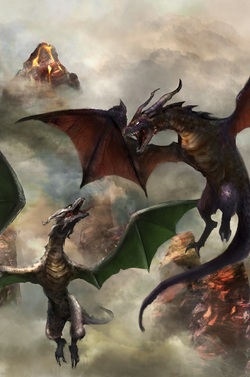 'Garass and Asher' by Jaki Martinez and Mike Fertig
Character: Garass Black
Race: Mountain Man
Homeland: Flame Mountain
This hot-head is in a dispute with Asher over a fiesty lady and has made death threats towards his exiled countryman.  Despite being untrustworthy and a dirty fighter, Garass is trying to curry favour with the Flame Mountain Council.  He has longish black hair, piercing black eyes, and wears black, studded leather with fingerless gloves. 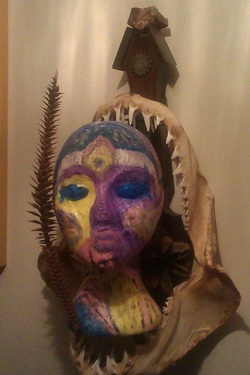 'Grand Mage Nnanelli' by Nathan Bourke
Character: Grand Mage Nnarndam:
Race: Nnanelli
Homeland: Nnanell
Nnarndam has striking purplish-blue eyes, and his long white hair and beard give weight to rumors that he is several hundred years old.  He wears a an ancient-looking grey robe with matching hat, and carries a long ebony staff.  His magical powers are: shape-shifting, fire and air. 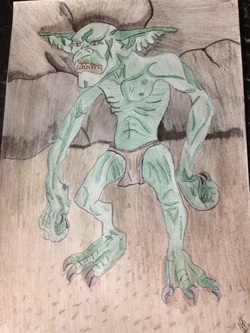 Character: Heikki
Race: Gnome
Homeland: Underground caves in Reloria
Gnomes are around three feet tall and love inventing.  Heikki is the proud designer and pilot of a strange looking flying machine.  He has pink skin, a long white beard and wears a garishly colourful collection of clothes. 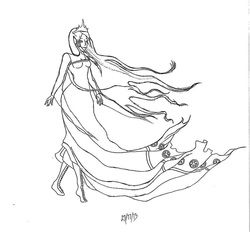 Character: High Elven Queen Liara-Star
Race: Elven
Homeland: Conlaoch Diarmada
This graceful elf queen is over 1000 years of age with golden hair, a glittering crown and deep blue eyes.  Her consort, King Phelaeron-Sky passed away several years ago and she has three adult children.  The Queen sometimes has visions of future events.  A High Elf is a magic user, in contrast to a common elf.
Sketch by Hecate Jerret

Character: Hydrane Blue
Race: Mountain Man
Homeland: Flame Mountain
Hydrane has caused trouble by trying to seduce Asher while her partner, Garass was away, resulting in Asher's banishment. She is a bizarre sight indeed, tall and solidly built, with two heads on overly-long necks sprouting from her broad shoulders.  Her black hair hangs down her back from both heads.  Her facial features are rather plain, although she has compelling silver eyes. 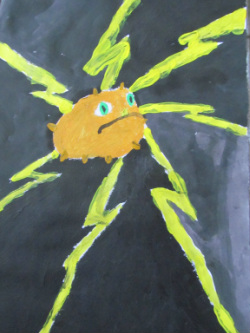 'The Lightning Creature' by Ryan, age 10.
Character: lldirim
Race: Ildirim
Homeland: unknown
The strange lighting creatures are one of many weapons the Cyclops have included into their fold. These unpredictable flyers set off random bolts of lightning. The Cyclops use these to torture enemies and to keep them weak and out of the fight.
The Halflings think they look like giant bloated yellow toads with a glowing antenna suspended in front of their mouth which causes the burp to ignite. 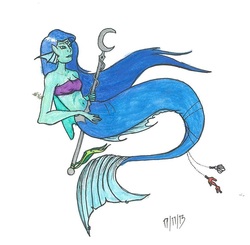 Character: Lady Eidothea
Race: Mermaid
Homeland: Coral City
Lady Eidothea is the leader of the mermaids and rules the Coral Sea.  Every ship passing through the treacherous waters off the Relorian coastline is a potential target for these sharp-toothed sea creatures.  Eidothea carries a golden sceptre and has blue hair and a blue tail.

Character: Mikel Brown
Race: Mountain Man
Homeland: Flame Mountain
Mikel (pronounced with a soft 'i') is younger than Garass and Asher and is sent with Garass to the conference with the elves.   He is calmer than Garass, but is reticent to be involved in the feud between the mountain men.  Garass has dark brown, spiky hair and wears brown, studded leather.  He carries throwing knives, though is less skilled with them than Asher. 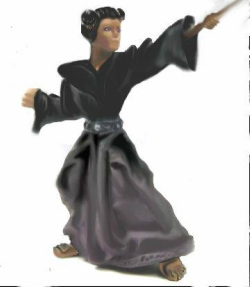 'Violetta' by Scott Patterson
Character: Violetta
Race: Nnanelli
Homeland: Nnanell
Vi is a wizard's apprentice and is annoyingly talkative.  She carries a white wand and wears black robes without shoes.  Her black hair is fashioned in two scruffy buns and she has beautiful violet eyes.