Elven Jewel
Book 1 of the Hunters of Reloria 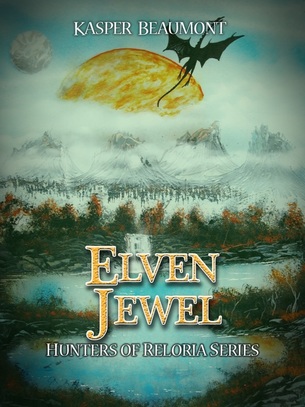 The peaceful continent of Reloria is threatened by cruel invaders from the wastelands of Vergash.  Halflings Randir and Fendi leave their peaceful farm village with their bond-fairies and race against time to stop the invaders.  They join forces with dwarves, elves, men and a mysterious dragon, on a quest to rescue the stolen Elven Jewel.
​
Now available in ebook and paperback
Go to amazon.com

This is an excerpt from chapter 5 of Elven Jewel and the first time we see the beast.  The characters are 2 elves: Princess Shari-Rose and her guardian Daeron; the dwarven brothers Baja and Raja; and four brave halflings: Old Fandri; his son Fendi; friend Randir and a huntress named Sienna. They have been tracked to an inn by their adversary, the Vergai invaders.   I hope you enjoy it.

They followed the sounds of struggling around the corner of the inn and saw an incredible sight.  A sopping wet Princess, wearing only a towel, was being held by the arms and legs by four of the scaly Vergai.  Another of the creatures was trying to muffle her screams with his clawed hand, which she was biting on as hard as she could and causing him to growl in frustration.

All around them was a battle.  Sienna held a green-stained dagger in one hand and was struggling with three of the creatures, two of which had arrows protruding from their torsos.  Green blood was drying around the arrow shafts. The huntress stabbed at the invaders and aimed at the thinnest area of their thick hide on the sides of their neck.  Her bond fairy was a short distance away and was so intent in watching the fight that she did not see a Vergai’s rough hand closing around her from behind.  The Vergai clapped his hands together and both fairy and halfling collapsed to the ground unconscious.

Fendi had grabbed a long dagger from the inn and Old Fandri drew his broad sword.  Fendi was momentarily stunned by being in such close proximity to the large and fearsome Vergai.  He exchanged a wide-eyed glance with his father, who gave a short nod.  Together they charged towards the Vergai with a roar.  Old Fandri stepped ahead to engage a Vergai with his sword and didn’t see one of the creatures whip around and strike Fendi solidly with his long thick tail.  The young halfling gave a grunt and fell to the ground.

The final four Vergai were moving to surround Raja, who was flailing about a two-headed axe, as though he was berserk.  Baja gave a yell and rushed to his aid.  Baja threw a small axe, which felled one of the creatures, and then the dwarf got out a large wooden club and proceeded to bash all the Vergai on their knee caps.  The two dwarfs were much shorter than the Vergai (who were about human height), but they made up for it in their fighting prowess.  The Vergai all stood well back from the half-crazed little men.

Old Fandri had entered the fight over by the Princess.  One of the Vergai had let go of her arms and had rushed at him with a chained morning star, spinning around dangerously.  Fandri was forced back towards the wall of the tavern and stumbled to the ground.  The Vergai was just about to land a killing blow with his rotating spike, when a long sword covered in green blood, appeared through his chest.  Daeron had come to Fandri’s rescue.

The powerfully-built elf looked dizzy on his feet and still had a bandage wrapped around his head from Lakehaven.  He extricated his narrow sword from the Vergai and threw him to the ground.  Then he held his hand down to help up the old halfling.  “Thanks,” panted Fandri.  “I’m getting too old for this.”  He looked around and saw that the Vergai were taking advantage of the chaos and half-carrying, half-dragging the screaming Princess off into the night.

Fandri looked at the other fighters and realised that the Vergai were gaining the upper hand.  Fendi, Sienna and Baja had been knocked out cold and Raja was the only one still fighting, but was totally surrounded by several big fighters.  Old Fandri was just thinking that all was lost when a powerful screech filled the night.  There was suddenly a flapping of great wings and a mighty burst of flame lit up the sky.  The Vergai around Raja screamed and ran off after the Princess.

The sky went dark again, after that brief burst of light.  All that Fandri could see was a huge dark shape, blotting out the stars.  It screeched again and gave a huge burst of flame, which whooshed right over the top of the fleeing Vergai.  Their thick scaly hides appeared to deflect the flames, but they screamed and howled and ran in all directions.  The winged beast flew to where the other Vergai were running with Shari-Rose and it picked them off her, one by one and threw them far into the distance, where they land with dull thuds.

Then the beast tenderly picked up Shari-Rose in its great talons and very carefully carried her back to the halflings and dwarves.  Her wet towel flopped to the ground by Old Fandri’s feet.  She looked like a child compared to the enormous creature carrying her carefully in one sharp claw.

By the light from the half-shuttered inn windows, Fandri, Daeron and Raja could see that the beast was a great, grey dragon.  Its body was four times as tall as a man and had a thick, scaly hide.  Its wing span must have been about 40 foot or more and the flap of the huge wings brought large gusts of air swirling all around them.  Emerald jewels gleamed from under the wings, as though they were embedded in the scales.  The dragon’s head had many horns and a large mouth with sharp teeth.  Its muzzle was long, with wide nostrils, issuing trails of smoke.

The dragon’s large, yellow eyes looked at each of the fighters below intelligently and then it placed the Princess gently on the ground.  Shari-Rose stared up at the great beast which had rescued her and was utterly speechless.  She didn’t even have breath to scream in terror.  The dragon flapped its gigantic wings and rose up into the sky.  It circled the inn once and then flew off in the direction of the Vergai.

Contact Kasper below for a copy of Elven Jewel